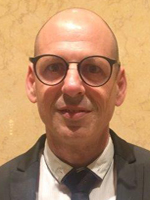 An Israeli high-tech veteran who over the past ten years has developed a successful firm designing, manufacturing and trading electronic components in the city of Shanghai.

He initiated his career as a software engineer in a software company specializing in medical laboratories. In 1997 David joined Orbotech Asia (NASDAQ: ORBK) as Assembly Line Regional Technical Manager and later became Assembly Line Greater China Sales Manager. After seven successful years in Orbotech, David moved to Shanghai and partnered with Electronics Direct from Germany to establish the highly successful electronic components trading company. Over the decade since its establishment the company has generated an enormous volume of business activity between China Europe, Israel and the US.

Leveraging his connections within the Israeli hi-tech market and the German precise manufacturing market, David has partnered with NGLi to lead large-size investments and M&A activities in the Chinese market.

David speaks fluent Mandarin and is a keen marathon runner and bicycle rider.

David holds a B.Sc. In Physics and M.Sc., in Business